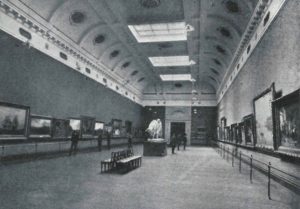 This room, one of several added to the Melbourne Public Library complex during the late 1880s to accommodate the growing collections of the NGV, was the showpiece for major international paintings from the collection during the 1890s and early 1900s.

Its contents opened the illustrated catalogues published in 1894 and 1905, listing the works in the sequence in which they were displayed. Almost all of them were 19th-century British and European canvases. In 1894, 56 works were shown, the only Australian work being Bunny Sea Idyll {1892} NGV [PA] (a recent gift from Alfred Felton); and the only sculpture was * Boehm Young Bull {1888} Melb. Showgrounds [SC].

In 1905 (overview reproduced here from NGV 1905, p.1), some recent acquisitions had been added, and the order of display changed somewhat, but Boehm’s massive marble Bull was still the centrepiece. Identifiable paintings include, in the left foreground, Bennetter Naval battle 1876 {1884} NGV [PA] and Heffner Early Morning in Bavaria (1891) NGV [PA]; and, in the right foreground, Nozal The Seine at St Pierre (1891} NGV [PA] and Brozik The Defenestration {1890} NGV [PA]. With few exceptions, the paintings were displayed side by side, the frames butted closely against one another.

This gallery, which runs parallel to the present Redmond Barry Reading Room, on the north side of the SLV, housed the library’s Australian manuscripts collection until 2019-20, when it once again became an exhibition space, renamed the Victoria Gallery.