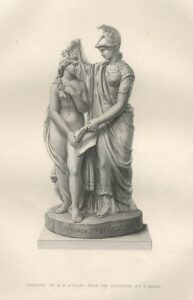 One of the pre-Felton sculptures de-accessioned in the 1940s was a marble group by British sculptor George Halse, called Advance, Australia.

Carved in 1865 and donated to the NGV in 1891, it encapsulates the idea of colonial Australia as a naïve adolescent venturing out from under the protective embrace of Britannia “into the clear open space of civilization” (as a reviewer for the British Art Journal put it in 1866).

For much of the period under consideration here (c.1855-1905), Halse’s statue may have seemed to many (especially in England) a reasonably accurate representation, given Queen Victoria’s long reign (1837-1901), and Australia’s essentially subject status, at least until Federation in 1901 (for further remarks along these lines, see Victorian Victoria).

Indeed, the foundation of the Melbourne Public Library (1853), and the first plans for its new Museum of Art soon afterwards, were still underpinned by similarly benevolent British ideals (civilizing, classicizing, improving). Early acquisitions of plaster casts after the antique, marble busts of Sir Redmond Barry and others in ancient Roman guise, and landscapes reminding visitors of “home,” reflected the same ideas and ideals.

In reality, though, Australia had already become a more robust and unruly child by the 1850s, symbolized in Victoria by formal separation from New South Wales and the beginning of the Victorian gold-rush (1850-1851), and the direct challenge to colonial authority in the Eureka Stockade (Dec.1854). Fuelled by gold, Victoria’s population grew from just under 80,000 in 1851 to well over 500,000 a decade later, and Melbourne was well on the way to becoming the thriving city later christened “Marvellous Melbourne” (1885).

Similarly, the collections of the NGV (as it was re-badged in 1869) gradually became more complex, and less tidy and British, as the century progressed. Pastoral subjects (featuring innumerable sheep and cows). and classic Victorian-era themes and topics (sentimental, Christian, Orientalist, militaristic, and so on), still tended to dominate the gallery’s walls and exhibition spaces. But local subjects were also beginning to appear. The acquisition of major Australian landscape paintings by von Guérard, Buvelot and others from the 1860s onwards unveiled a different idea of nature from most of the English and European examples in the collection, one that would prove influential on the next generation of local painters dubbed “Australian Impressionists.”

In the 1890s, as the number of locally-born non-indigenous Australians outstripped the number of immigrants for the first time since 1788, significant canvases by Streeton, McCubbin and other local painters were purchased for the NGV. They were selected by Bernard Hall, appointed NGV Director in 1892, who despite his English origins and training, showed a strong interest in local artists and images during his first years in charge, also choosing several lively and controversial graphic works by Phil May and Norman Lindsay during the early 1900s.

[Australia’s ties with Britain, it should be observed, have proved extraordinarily difficult to loosen, extending long beyond Federation, even to the present day. As late as 1963, Prime Minister Robert Menzies could still gushingly declare his devotion to Queen Elizabeth II during a state visit. And the issue of the British monarch still having constitutional authority over Australia became a flashpoint with the dismissal of Gough Whitlam’s Labor government by the Governor-General John Kerr in 1975, a controversy rekindled in 2020 by the release of correspondence between Kerr and the Queen’s private secretary at the time.]

The entry on Halse’s statue provides further information and references, as does Victorian Victoria, on the pervasive influence of Queen Victoria and “Victorian values” during the period

The observation about native-born individuals finally outstripping immigrants among Australia’s settler population in the 1890s, when Australia’s total population was about 3-5 million, appears in George Magalogenis, “The Middle of Nowhere,” The Monthly, Dec.2019-Jan.2020, p.16 (noting that the reverse eventually occurred in 2018, when the total population passed 25 million)


For archival footage of Menzies’ 1963 speech to Queen Elizabeth II, see https://www.youtube.com/watch?v=6ibGwqMM6uU; and for the recent release of the 1975 correspondence regarding the Whitlam dismissal, see e.g. https://www.bbc.com/news/world-australia-52844272 (both sites accessed 24 July 2020)