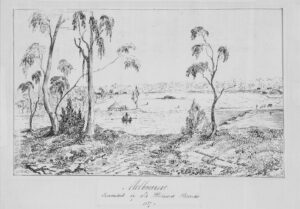 AR 1870-71 lists a drawing of “Melbourne from the Falls, 1837” as presented by Fawkner (without naming the artist), together with other drawings by O’Brien and Strutt, documented as donated in 1868.

Among several possible candidates extant in the SLV, the work reproduced here appears to be the most likely candidate. However, it should be emphasized that Russell returned to this subject repeatedly during his long career, often referring specifically to a sketch he had made from his cottage on the old Yarra Falls on 30 June 1837: refer SLV catalogue for further details.

For Richard Bourke, NSW Governor 1831-37, who presided over the official founding of Melbourne in 1837, see Oval Portraits (no.23).