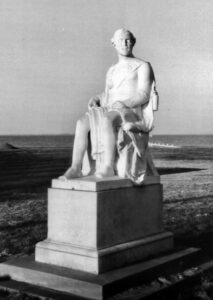 Summers researcher Jennie Maggs has recently clarified its history following its de-acquisition from the NGV, and kindly forwarded the photo reproduced here, which she took in 1984, when the work was still more or less intact.

Initially, the statue was set up in Victoria Terrace, Geelong, where it remained until the mid 1960s, when it was relocated to the Geelong foreshore. In 1999, it was vandalized and decapitated, and the head stolen. Eventually, funds were raised for repair of the statue, including the addition of a new marble head, somewhat different from the original. The statue was re-erected on the corner of Moorabool and Brougham Streets in 2014, and was awarded a National Trust Heritage Award the following year.

For an engraving of the work with the others in the group donated in 1878, see * Summers (Charles) Queen Victoria {1878} Melb.Showgrounds [SC]. And for another portrait of Albert Edward formerly in the Melbourne collection, see * Copeland & Sons (after others) Prince and Princess of Wales {by 1871} Loc? [SC], a Parian bust of c.1864.

Many thanks to Jennie Maggs for forwarding relevant details and photographs (July 2020). See also http://guides.slv.vic.gov.au/c.php?g=245295&p=1633312 (with further details and references, including a link to a 1939 Argus report noting the relocation of the statue to Geelong)