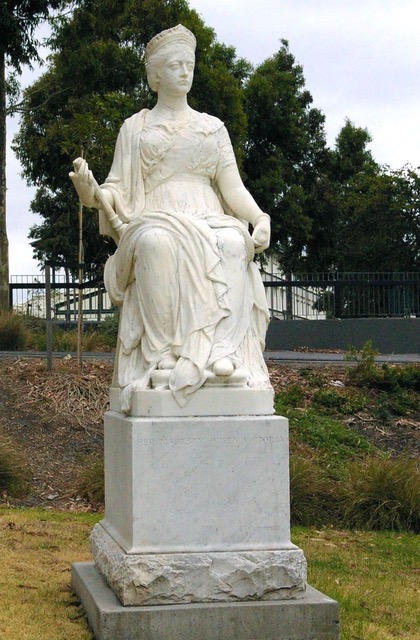 Summers completed the sculptures in Rome, but died in Paris in November 1878, en route to Melbourne. The donor acknowledged the sculptor’s achievements in the speech he made at the unveiling of the group early in 1879.

The engraving published at the time, reproduced below, indicates the original disposition of the four statues: from left, the Duke of Wales (later Edward VII), Queen Victoria, Prince Albert, and Princess Alexandra. Gerard Vaughan (2013) notes that all four figures were depicted as they would have looked around the time Prince Albert died in 1861.

A photograph by Charles Rudd, dateable to c.1888 (reproduced in Sculpture – introduction), shows statues from this group in the Library’s octagonal “Marble Hall,” built to accommodate these and other statues, and they were still there in 1894 (NGV 1894, section VI). Later, though, they were relocated to the entrance hall of the library: see 1905 Public Library Foyer. A 1928 Argus article refers to all four statues as still in the entrance hall, although a 1913 photograph shows the figures of Victoria and Albert outside the library, under the portico (SLV H2013.198) – perhaps for a special occasion.

In June 1939, the statues of Victoria and Albert were lent to the Royal Agricultural Society, and this decision was made permanent in an order ratified by the NGV Trustees in October 1941.  For the subsequent history of the other statues in this group, see separate entries.

[reproduction below: the statues in their original disposition, as illustrated in Feb.1879] 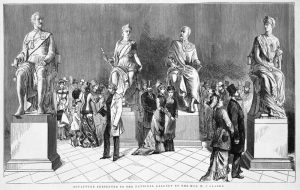 The photograph shown above was taken in 2014 (many thanks to Jennie Maggs for permission to reproduce it). The engraving of the group appeared in the Illustrated Australian News, 21 Feb.1879. See also Vaughan “Queen Empress” (2013), and http://guides.slv.vic.gov.au/c.php?g=245295&p=1633312 (with further details and references, including the 1913 photograph of the Library portico)