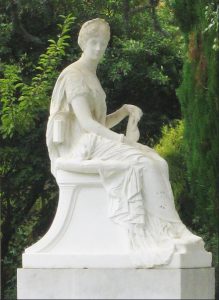 This fourth statue in the group of portraits of the royal family donated in 1878 (for details, see * Summers (Charles) Queen Victoria {1878} Melb.Showgrounds [SC]) was relocated to the Victorian town of Alexandra in 1939.

A Princess of Denmark, Alexandra (1845-1925) married Albert Edward (later Edward VII) in 1863. Reputed to be a great beauty, she has the dubious distinction of having held the title of Princess of Wales for longer than anyone else.

For another portrait of her formerly in the Melbourne collection, see * Copeland & Sons (after others) Prince and Princess of Wales {by 1871} Loc? [SC], a Parian bust possibly after Mary Thornycroft (c.1863).