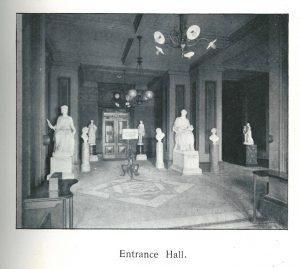 This partial view of the library’s entrance hall (as published in the 1905 NGV catalogue, before p.1), includes several recognizable marble sculptures. Clearly visible in the left and centre foreground are Charles Summers‘ statues of Queen Victoria and Prince Albert.

For the full list of sculptures exhibited in the foyer at the time, see NGV 1905, pp.154-55 (VI.Sculpture, cat.nos.1-14), also listing the other works not visible in the present photo, including the other two royal statues by Summers (Edward VII and Alexandra, the reigning monarchs by 1905).