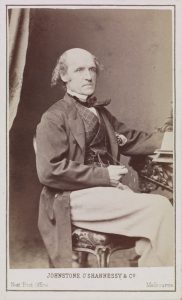 A prominent Melbourne lawyer and politician, Michie was also one of the original Commissioners of Fine Arts (1864). In 1866, he donated two significant paintings by Gritten and von Guérard (details above), and he became an NGV Trustee in 1870.

After being appointed Victorian Agent-General in London in 1873, he continued to be involved in the purchase of works for the NGV: see list above. In an 1873 letter to Redmond Barry he was critical of the commission of Herbert Moses bringing down the Tablets of the Law 1877 {1878} NGV [PA].