This was one of the four drawings from James Cook’s voyages donated to the Melbourne collection in 1882, all of them regarded at the time as the work of John Webber (who travelled with Cook on his third and final voyage, 1776-80).

On the face if it, then, this fourth drawing, apparently no longer extant but described in NGV 1894 as similar in both size and medium (“crayon”) to Hodges Mallicolo 1774 {1882} SLV [DR], might also have been by Hodges.

However, Cook visited Tahiti (also known at the time as “Otaheite”) on each of his three voyages, and the possibility that this work was indeed made by Webber must remain open. Worth noting in this respect is a painting said to be by Webber, also known as A Native of Otaheite, and dated 1777 (Fitzwilliam Museum, Cambridge; bequeathed in 1834): see comparative photo below. This portrait, whose dimensions are actually slightly smaller than those indicated for the present drawing, has a similar idealizing character to various images of the celebrated Tahitian Omai (Mai), who travelled to England with Cook in 1774, returning to Tahiti on the explorer’s final voyage, in 1776. 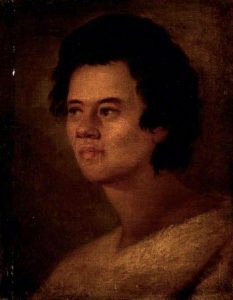 Finally, it should be noted that the four drawings given to Melbourne in 1882 were also donated with Bartolozzi & Byrne, after Webber: Death of Captain Cook 1785 {1882} SLV [PR], also obviously based on a composition by Webber.

Nevertheless, in the absence of a photograph or further information, the authorship of the present drawing must remain uncertain.

Not mentioned in Joppien & Smith, Art of Captain Cook’s Voyages (1985); for the other drawings, see Joppien, “Three drawings by William Hodges” (1976): refer Bibliography