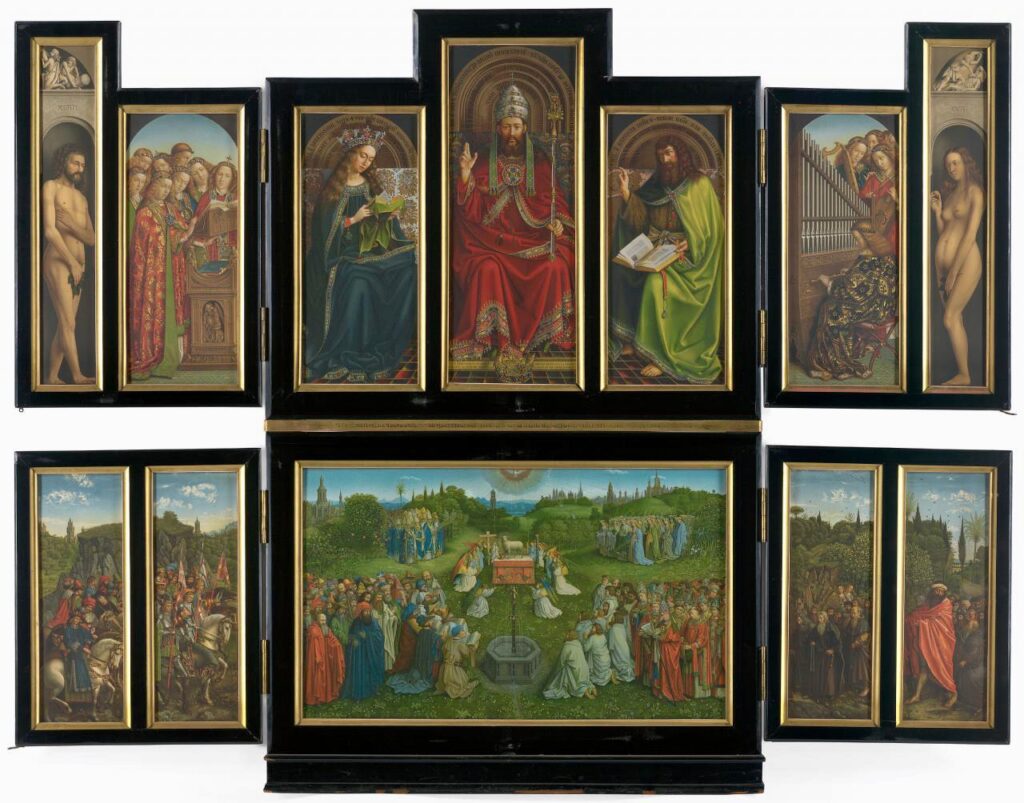 In several meticulously-researched studies, Melbourne art historian Alison Inglis has emphasized the reliance of both private and public collections in colonial Australia on “replicas, reproductions and copies.”

Although the modernist “tradition of the new” tends to view such objects askance, 19th-century audiences had no such qualms. An Argus article of 1868 proclaimed: “we are decidedly of the opinion that good copies of really great works are better than the mass of indifferent originals we possess”; and another Argus writer (1869, also quoted by Inglis) was full of praise for Melbourne’s “mania for copies.”

These views were shared by many at the time, including influential individuals associated with the Public Library and the NGV, and as a result considerable quantities of such material entered the pre-Felton collection, beginning with the initial acquisitions of plaster casts and other reproductions, in 1860-62.

Although original paintings and sculpture were acquired regularly from 1863 onwards, reproductive works of various kinds continued to enter the collection in large quantities throughout the pre-Felton period, providing a valuable guide to the taste and artistic attitudes of the era, as Ann Galbally, Alison Inglis and others emphasized through their inclusion in the “First Collections” exhibition/catalogue (1992).

Copies and facsimiles continued to be displayed in the NGV well into the 20th century, although Bernard Hall took some care in NGV catalogues issued from 1894 onwards to identify copies as such. However, criticism of this practice was voiced authoritatively and effectively in a 1937 report by Felton Bequest adviser Sir Sydney Cockerell, who observed that “it is a grave error to combine authentic works of art with so many modern so-called reproductions.” A more recent softening of this view (especially after Postmodernism complicated the whole question of artistic originality) has led to renewed interest in the reproductive culture of the past.

Nevertheless, after considerable thought, the compiler of the present catalogue has opted not to catalogue most of these works in the same detail as the original acquisitions. In practice, of course, the distinction is difficult to apply systematically. Thus reproductive engravings, including the important early engravings from the Levey Gift (1879), as well as copies and duplicates of paintings and sculpture, e.g. the painted copies produced under the terms of the NGV Travelling Scholarship, do still appear in the main catalogue.

Groups of material not listed in depth in the present catalogue are as follows.

For complete lists of all the documented casts after antique and other originals collected for Melbourne between 1860 and 1904, see Plaster Casts. They provide revealing insights into the ideals and aspirations underlying the formation and early development of the pre-Felton art collection. Most of the casts were purchased, but many were donated, some by notable Victorian pioneers and public figures. Only a few of the casts are extant, most of them being de-accessioned from c.1900 onwards.

This organization was founded in 1848 by Sir Charles Eastlake and others, expressly to spread knowledge of medieval and Renaissance painting, especially the Italian and Flemish “Primitives.” Its annual publications, issued until 1897, were acquired enthusiastically by the Melbourne Library, and praised by Eugene von Guérard in particular, during his period in charge of the art school (1870-81), a selection being displayed in a special “Arundel Room” in the Picture Gallery during the 1870s. The NGV’s Annual Reports issued from 1870 include details of each year’s Arundel acquisitions.

From 1857, most Arundel Society prints were “chromolithographs” (coloured reproductions of modern copies of late medieval and Renaissance paintings). A spectacular example, still held in the NGV, is the copy of Jan and Hubert van Eyck’s Ghent Altarpiece (1868), reproduced above. The 1897 NGV catalogue (p.120: V.Buvelot Gallery, 4th bay), also lists an unspecified “collection of chromo-lithographs” under “Publications of the Arundel Society”; and Alison Inglis (1988, 1992) discusses and reproduces several examples still in the NGV.

Autotypes (or carbon prints, produced from the 1860s onwards, especially to reproduce drawings), were also collected in large numbers for Melbourne during the period, and listed in the NGV’s Annual Reports. For instance, AR 1882, p.37, lists 48 autotypes of “Drawings by the old Masters in the Library of Christ Church, Oxford” and 32 “large autotypes of Greek and Roman Sculpture in the British Museum and Vatican.”

Both the 1894 and 1905 NGV catalogues list “Autotype Reproductions of Drawings by Old Masters” (without providing  specific details): see NGV 1894, pp.111 and 120, and NGV 1905, p.125, describing them as “on revolving screens.” Until recently, a considerable number of these autotypes still appeared in the NGV’s online catalogue, some catalogued under the name of Adolphe Braun, an early practitioner of the technique. However, these and other similar reproductions are currently being de-accessioned by the NGV and re-designated as research material.

Photographic reproductions of works of art

NGV Annual Reports and the early catalogues also list a large number of photographs of works of art, several of them displayed in the galleries at various times, and others collected in large albums (several still in the SLV). They are a varied collection, as shown by the following examples:

Finally, various replicas of decorative arts objects, some of them still in the NGV, are listed in the gallery’s various annual reports and early catalogues, especially after about 1880. In some cases, further research appears to be required in order to disentangle original works from replicas in this corpus of material (see now Decorative Arts – Introduction).

For the general issues involved here, see in particular Alison Inglis’s two detailed essays in Galbally & others (1992), pp.31-37 (for the Argus quotes cited above, see esp.nn.1 and 37) and 66-71 (including catalogue entries for chromo-lithographs etc.). See also Inglis, “Art at Second Hand” (1988). Cockerell’s 1937 report is reprinted in full in Cox NGV (1970), Appendix 6, esp.p.412 (quoted). See also Bunbury Picture to Print (2006), including discussion and reproductions of the van Eyck facsimile by Hangard-Maugé & Schultz, pp.22-23. For autotypes, evidently a precursor of black and white photocopies, see e.g. https://www.thefreedictionary.com/autotypes (accessed 9/10/18)