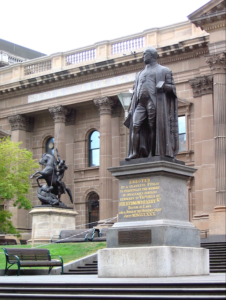 This comprehensive history of the birth and early development of Melbourne’s art collection involves a wide variety of contributing factors and individuals (artists, patrons and others).

The brief introductory essays listed below provide several pathways into this rich and intriguing history, singling out a few of the numerous ways in which the pre-Felton collection may be considered.

Obviously, there was an inevitably male, Anglo-Saxon, conservative cast to many works in the collection, mirroring the values and attitudes of those who formed it, and many of those who visited the gallery. Our current emphasis on “unlearning privilege” would probably have mystified many at the time, and there is undoubtedly a self-aggrandizing and self-satisfied character to quite a few of the portraits of the influential figures of the period.

Nevertheless, Sir Redmond Barry and his fellow Trustees did set out to make the Melbourne Public Library, Gallery and Museums freely available to the populace of Melbourne and Victoria, and the art collections contain various more popular or alternative images, such as Fuller Barak 1885 {1901} SLV [PA]. This rare representation of the famous Aboriginal elder and painter, categorized at the time as part of the ethnographic collections of the Museum, is now part of the State Library’s Picture Collection.

Florence Fuller’s portrait of Barak is also an example of a work by a female artist, still a rarity in this period (but see also entries for Mathilde Philipson, Ellis Rowan, Margaret Thomas, Elizabeth Thompson – and Queen Victoria).

The short essays listed below tease out these and other topics. Reference should also be made to the supporting material provided in the Bibliography (which lists abbreviations and short titles for frequently-cited references), the Summary Chronology of acquisitions, and Documentation. See also Artists and Donors +

Linked summary entries (these may be read in sequence or individually):

A Note on Representations of Aboriginal People